This means that any new buildings erected must incorporate electrical sockets that conform to the new standard.

An amendment to the wiring code introduced in 2016 stated that the ZA Plug would become semi-mandatory for new installations in March 2018.

Each new plug point must have at least one socket that can accommodate a ZA Plug, it said.

The amendment came into effect two months early, said the SABS, and from January 2018 all new installations must incorporate the ZA Plug.

The ZA Plug has the same hexagonal profile as the Europlug seen on cell phone chargers but includes an earth pin. It is substantially more compact than South Africa’s three-prong plug standard and has much thinner pins.

Adoption of the standard has been slow, however.

Gianfranco Campetti, the chairman of the working group that looks after the standard, said the industry has been slow to respond and use the standard in essential products.

He said the appliance industry, in particular, has been slow to provide goods with the new plug. 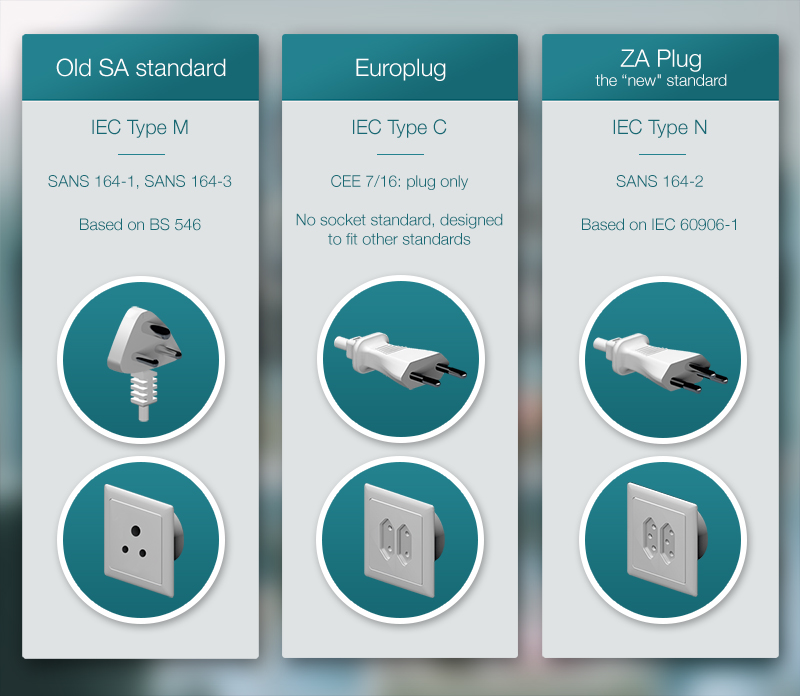 When the IEC first began development on IEC–906–1, which became IEC60906–1, it was trying to establish a universal plug and socket system.

Despite its efforts, commercial and political interests caused the standardisation initiative to fail in Europe – and Brazil and South Africa are the only countries to have adopted the 250V standard.

However, Brazil deviated from the standard by delivering either 127V or 220V mains using the same socket.

Japan and the US have plugs and sockets that are compatible with the IEC’s envisioned global standard for 125V sockets.

Talk of adopting the new standard began in South Africa in 1993, and a version of SANS 164–2 that dates back to 2006 is available online.

Although it is now required to integrate sockets which comply with the ZA Plug standard in new buildings, the old standard remains legal.

The wiring code amendment also does not affect existing buildings, including homes.

It is therefore not currently necessary for South Africans to switch the electrical sockets in their homes.